…what else ya got? A bit of a rough start to the work week as we were hit with a plethora of different types of precipitation over the weekend including. They were all di-hydrogen monoxide based but regrettably crashed to earth in varying physical states, none of which were pleasant to look at or be in except for that snow portion – always been partial to a white Christmas though seen it maybe once. And it all occurred within a in a fairly short period of time. Blame it on the temperatures as they fluctuated from freezing to not quite freezing and at seemingly strange times (got warmer at night – go figure). All of this led to school closures due mostly to the mysterious and evil “BLACK ICE!”.  Better safe than sorry unless you run your own business and feel like you have things that have to get taken care of lest you have to do 3 times as much when you get back in the office – then throw caution to the wind. Fortunately we avoided the dangers and made it into the office again today, thank goodness since you wouldn’t be reading this right now, otherwise. Amirite?

So after all of that digression about the weather – SNOW (I know, I always digress about the weather – but it’s kinda important!) let’s talk about business. Ha! That’s why we’re talking about the weather, not much business. With the snow, the number of tours went down, as we had a couple of folks give up until later, that’s simply to be expected. We were able to close on a couple of properties and have another to close by the end of the week. After that, it’s on to 2019 as we are working on a couple of big property deals to close out the year though they won’t close until next year. We have been busy with listings as well as we’ve taken three new ones over the past couple of weeks. One million plus dollar home, one townhome on the water and one interior lot with a boat slip. Now we just need some good weather to get all of the videos done.

We hope all of y’all made it through the storm unscathed and with your power intact. Make sure you get all of your Christmas shopping done and we’ll speak again next week. Until then, do something to your property that makes it more valuable!

29 Essential Tips That Get Homes Sold Fast (And For Top Dollar)
Tip #28, Make sure the contract is complete.
The best way to avoid problems is to make sure that all terms, costs and responsibilities are spelled out in the contract of sale. A contract should include the date it was made, the names of the parties involved in the transaction, the address of the property being sold, the purchase price, where deposit monies will be held, the date for loan approval, the date and place of closing, type of deed, any contingencies that remain to be settled, and whether there’s any personal property included (or not) in the sale, among other things.
Check out the Lake Keowee Real Estate numbers for the year
Year End Numbers 12 1 18
Absorption Houses and Lots November 2018
Lake Keowee Area News Corner
Oconee, Pickens, prep for season’s first winter storm
Oconee Pickens prep for season first winter storm

Oconee and Pickens County residents can begin to prepare for a weekend of wintery mix, according to a meteorologist with the National Weather Service in Greer. Snow!

Sleet, ice, snow expected – By Riley Morningstar – SENECA – Oconee and Pickens County residents can begin to prepare for a weekend of wintery mix, according to a meteorologist with the National Weather Service in Greer…

Officials ‘don’t have a clue’ about time frame for decision. 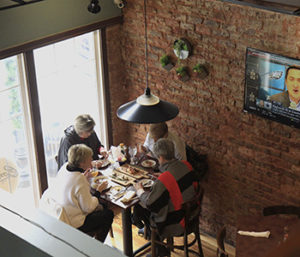 With a private entrance, the upstairs dining area at Bonaterra features three fireplaces and a full bar, making it the perfect place to host holiday gatherings or birthday celebrations.

By Caitlin Herrington – SENECA – With a fresh coat of paint, new floors and a fresh, casual menu, Bonaterra quietly opened the newest restaurant on Ram Cat Alley on Oct. 30…