Stargazing On Lake Keowee & What to Look For

One of the perks of owning a house on a Lake Keowee or Lake Jocassee is personally having a little piece of peace that’s secluded and nestled cozily in the woods. Lakefront properties and houses located by the water are the perfect spots to escape the city and the busyness of life. So sit back and bask in the beauty that is your backyard!

Of course, the immense lake view is a breathtaking sight, but there is another jaw-dropping view that sometimes gets forgotten about, but it can only be seen at night. Owning a home away from the city lights offers up a clear, front-row view of the stars and constellations!

Stargazing can be a peaceful and bonding experience! Those who are fortunate to have stunning views of the night sky should take advantage of checking out the stars, at least every now and then. We’ve put together a list of major stars and seasonal constellations that are only viewable in the night sky! So make sure to bring your binoculars or a telescope, if you keep one in the garage, and take a gander at the stars!

First on our list is a constellation that is rather easy to find during the winter months, more specifically between November and March. Canis Major, also known as the Great Dog, contains one of the sky’s brightest stars, Sirius- the Dog Star (and now Sirius Black’s character in the Harry Potter books is starting to make sense). There are only 4 objects brighter than Sirius and that would be the Moon, Venus, Jupiter, and Mars!

In Greek mythology, Canis Major together with Canis Minor was said to be Orion’s hunting dogs and were one of the most important constellations during ancient times.

Cetus is one of the largest constellations that you can find in the night sky, but is only available for viewing between October and January! Cetus is the Sea Monster and in ancient history, this was the same sea monster that almost ate Andromeda, whose parents left her chained to a cliff. Before she could be swept away by the giant sea monster, Perseus defeated him and later went on to marry Andromeda.

To see this constellation, look for his circular head near Taurus, another constellation. The rest of Cetus’ body stretches on towards the southwest. The top circle of Cetus is its tail and if you look closely, you may also find a few galaxies and a nebula!

Orion is one of the most widely known and easily found constellations! Orion, aka the Hunter, contains the brightest star in the night sky, Sirius, and does indeed look like an image of a person. There are many things to find in Orion, including clusters and nebulae.

Onion is commonly found by his belt, a line of three bright stars. One of his legs is composed of Rigel, another bright star and his shoulders are made up of the stars Betelgeuse and Bellatrix. Betelgeuse can be seen without a telescope, as this star gives off a reddish color. The rest of his body is made up of his arms, a shield, club, and sword.

According to Greek and Roman mythology, Orion has two stories. One story is of a proud and arrogant Orion, who believed no creature could kill him. Because of this Hera sent a scorpion to kill him. Orion hit the scorpion with his club but ultimately was still poisoned by its sting.

The other version of Orion is a fateful love story between Orion and the goddess, Artemis. According to legend, Apollo (Artemis’ brother) didn’t like Orion and deceivingly tricked Artemis into shooting Orion with an arrow and killing him. Overcome with grief, Artemis honored him by placing him in the sky. 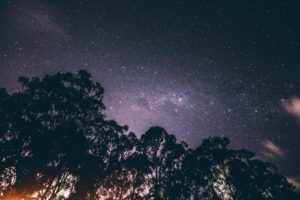 Gemini is a popular winter and spring constellation. Gemini can be fairly easy to find. What you’ll need to look for are two bright stars Pollux and Castor, which are the twins’ heads. From there, you’ll start to see their bodies. Gemini lies between Cancer and Taurus.

In mythological history, the Greeks believed the twins were the sons of Zeus and Leda, whereas the Romans saw them as heroes Remus and Romulus who founded Rome.

Take a look around Gemini and you’ll see a nebula, near the left twin’s arm and a cluster of stars near the foot of the right twin.

If you look up, you might be able to see the figure of a man, better known as Perseus. Perseus was a Greek hero who was most commonly known for conquering Medusa. This is also the same Perseus who saved Andromeda from the sea monster by using Medusa’s head to turn the monster, Cetus, into stone.

Perseus has a triangular body, with legs and feet that look like they’re curling up towards his head. Look up from there and you’ll notice that it seems like he’s carrying something, which can be taken as a weapon or Medusa’s head!

Perseus contains the famous binary star, Algol. Algol is the white star that is found in Perseus’ right leg. What makes this star unique is that it looks like it is blinking and that’s because there is a dimmer star that revolves around a brighter star! Perseus is also located along the Milky Way with additional celestial treats to look for!

The last constellation worth mentioning for the winter constellations is Taurus. Taurus, which is also referenced to as The Bull, is visible from November to March.

Bootes is a constellation that can be seen in the night sky from late spring to early summer. Bootes is the herdsman that in fact looks like a kite and contains the red supergiant star, Arcturus. Arcturus is 36 light-years away but still has a brightness that is well over 100 times that of our solar system’s sun! Arcturus is the fourth largest star in the sky and is located at the tail end of the kite.

Hydra is notable because it is the longest constellation in the sky. The serpent takes more than six hours to rise and to be completely visible in the sky. On the north side of this constellation, you can also see Leo, Virgo, Cancer, and Libra.

According to Greek mythology, Hercules defeated Hydra as one of his twelve labors. Amongst his other labors were killing Draco, the dragon, and Leo, the lion.

There are a few more constellations worth mentioning during the spring months and those are Leo, Cancer, and Virgo (which contains a cluster of 3,000 galaxies)! 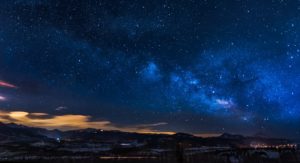 The Greek warrior, Hercules, can be seen in the night sky from April to October. Hercules contains a remarkable global cluster, M13 and can be seen without a telescope or binoculars. M13 is made up of 300,000 stars!

According to mythology, Hercules defeated many other constellations in the sky, including Leo, Draco, Cancer, and Hydra!

The Lyre, Lyra, is a small harp. Lyra not only contains the fifth brightest star in the sky, Vega, but Lyra is also home to the planetary nebulae, Ring Nebula. Vega can be found in the handle of the harp and Ring Nebula can be seen without binoculars, but you might need stronger equipment to see its smoke-ring shape!

If you look for Lyra in April you might get a chance to see the Lyrid meteor shower, which occurs each year. Look closely and it will appear as if the meteor shower is shooting out of Lyra itself!

There are many more summer constellations to see this time of year. The constellation Cygnus contains a young bright blue supergiant star named Deneb and a few different nebulae. The constellation Ophiuchus is home to RS Ophiuchi, a recurrent nova (these objects stay dim a majority of the time, but then abruptly brighten). And lastly, during the summer months is when the Greek mythological scorpion, aka Scorpius, who defeated Orion, can be seen.

Pegasus, the white winged horse can be found in the sky from the end of summer and through the fall. When looking for Pegasus you might have to do some adjusting to see the flying horse, because he is actually upside-down in the sky!

The “Square of Pegasus” is one of the easiest ways to find this constellation. From the base or “Square of Pegasus,” you can see his legs, neck, and head, but mythologists aren’t sure what happened to the rest of his body!

The origin story of Pegasus is definitely a mythical one. According to myth, Pegasus’ story begins with a battle between Medusa and Perseus.  Pegasus came to be when Perseus killed Medusa and cut off her head, resulting in her blood falling into the sea. Her blood mixed with sea foam and created Pegasus!

You can find the constellation Andromeda, by looking for a “V” in the night sky. Andromeda is commonly seen upside-down and is right next to Pegasus. Some people believe that some of these stars were once a part of Pegasus. It’s easy to see why this is the case because of their close proximity and the fact that these two constellations share a star. Andromeda and Pegasus share the star, Alpheratz. Alpheratz is Andromeda’s head and Pegasus’ last star.

This, in fact, is the same Princess Andromeda we mentioned earlier from Greek mythology, who was tied to a cliff and rescued by Perseus.

Take a look around Andromeda and you’ll find The Great Andromeda Galaxy that can be seen without a telescope or binoculars and is located on the right side of Andromeda.

There are plenty of other autumnal constellations to see, so be sure to check out Pisces, Capricornus and one of the oldest constellations in the sky, Aquarius.

For those who may be unaware, circumpolar constellations can be seen year-round, so you have plenty of time to see these constellations at least once!

Draco the Dragon is only visible in the northern hemisphere and is another long constellation. You can easily find Draco by looking for his head, which is located just north of Hercules. The rest of Draco’s body scales through the sky and eventually ends between the Big and Little Dippers.

There are many celestial objects that can be found in Draco too, but a favorite of astronomers would be The Cat’s Eye Nebula!

Ursa Major, or Great Bear, is neck and neck with Orion as one of the most famous constellations. The body and tail of this constellation make up the popular constellation, the Big Dipper. Looking at the Big Dipper, gaze on over to the outer edges of the bowl and you’ll notice two pointer stars, Dubhe and Merak. Connect these stars and extend a straight line north and you’ll reach the North Star, Polaris!

There are a few galaxies and a nebula located around the Great Bear. M81 and M82 are located just above the head of the bear (M81 is also one of the brightest galaxies in the sky) and the Owl Nebula can be found just left of the star Dubhe!

One of Ursa Minor’s most notable parts would be its tail, which is the North Star, Polaris! A little fun fact about the North Star is that its name doesn’t come from its brightness, but instead the fact that it doesn’t move. Polaris is sometimes mistakenly thought of as a bright star, but it is rather dim.

Another interesting celestial object around Ursa Minor is a circle of stars, known as the “engagement ring” which can be found below Polaris. Look for this special circle of stars with a telescope or binoculars!

The beauty of stargazing is that it can be a year-round activity and there’s no better place to be than on the lake. With plenty to see when viewing stars and looking for major constellations, this is sure to be an activity that will not get old! So whether you like the warmer temperatures or prefer a brisker night, there is always a constellation to see (just make sure there’s a clear sky first)! 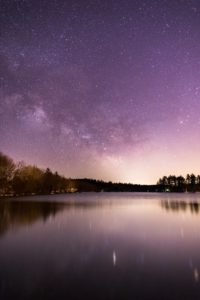