By Jerry Lamar Alexander – In 1828, Pickens Court House, “that shining city on a hill,” became a reality among the stately oaks lining ole Keowee RIver.

This was at Robertson’s Ford alongside the ancient east-west Cherokee Trading Path 5 miles northeast of Seneca. Fortunately, today this 1862 Antebellum court village site is still barely visible among the main buildings at one of the most magnificent electrical power generating complexes in our modern world – Duke Energy’s famous World of Energy.

Back in 1828, the expanding population of settlers was literally crying out for a new, centrally located district court. it was deemed more than just badly needed to serve our mountain people. After some amount of surveying, stakes were driven in by local commissioners as an outline for a new (1862-1868) “Pickens District Court house.”

And so, civilization came stumbling into the area as the Antebellum District Court Town (for Oconee and Pickens counties) as we know them today. And, by the way, both these lovely counties are today stacked full of beautiful lakes and cheerful people celebrating their 150th birthday this year. But their “mothering town” was this 1862 Pickens Court House.

Although built of mostly heavy plank and skinned logs, the rough little mountain village quickly gained several buildings and about 1,600 people, most attracted by the business at the double- storied court house. Land deeds had to be recorded, as did plats and all legal papers. Lawsuits regarding land or other debts drew crowds as well.

Shinging city on a hill 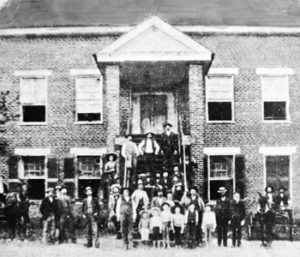 After the district was divided, a new courthouse was required for Pickens County as well as Oconee County at Walhalla. This is the first courthouse (about 1871) new Pickens. It had been moved board by board on wagons, and brick was added.